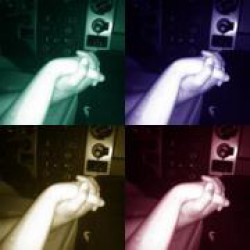 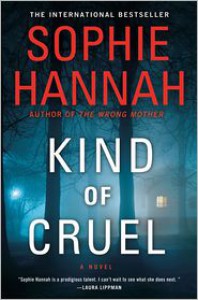 I received this arc from the publisher through First Reads. I was super excited when this came in the mail, as I love mystery/crime fiction! I had not read anything by Sophie Hannah and did not really know anything about this series.

The story begins as Amber Hewerdine decides to see a hypnotherapist for her ongoing insomnia. During her first session she says the words "Kind, Cruel, Kind of Cruel" without knowing the meaning behind them or where she saw them written. Next thing you know, she is picked up by the police for questioning regarding the murder of a local school teacher, Kat Allen.

The point of view shifts back and forth between Amber, the therapist, and each of the detectives involved with the case. This shifting narrative becomes very complex and sometimes difficult to follow. I did, however, discover that I didn't care much for any of these characters. Which is unfortunate because a large chunk of this book is spent on character development. The plot on the other hand was interesting, but not particularly compelling.

Overall it was an okay read. I probably would have enjoyed it more had I read the previous books. If you are a fan of Sophie Hannah and enjoy the series then you will probably like this book.
Tweet